Report on the SWSW weekend in Weymouth - by Roger Adams
The weekend started early with the desperados of SWSW gathering in Portland jail, not for a few minutes of association before being led back to the cells but for Friday lunch in the Jailhouse Cafe. The food was excellent, the service was great the value for money second to none.


After lunch, we all gathered outside Portland museum for a walk to the southernmost tip of Portland Bill and back. En-route, five people spent 25 minutes learning all about the activities of the coastguard station whilst the rest of us headed for the café by the lighthouse. The visibility was good such that the views both towards St Aldhelm’s Head, some 20 miles to the east and to Exmouth, some 40 miles to the west were stunning. The day was rounded off with dinner in one of the many quayside eateries in Weymouth.


The strong winds of Friday were still blowing as we set off for the Saturday walk from Abbotsbury, an attractive village well known to tourists. The initial route took us via the church and the remains of an ancient monastery to St Catherine’s Chapel, perched on a small hill just outside Abbotsbury and visible for miles around. Then came the main event; a stiff climb out of the village to the South Dorset Ridgeway where we followed the route west to West Bexington, passing an iron age hill fort and burial mounds on the way. Sadly, we didn’t quite make the watering hole before one of the rain showers arrived. However, the rain passed quickly and folk were able to dry off in the sun before the next shower arrived. After lunch we returned to the one of tearooms at Abbotsbury (one that had been thoroughly reconnoitred by Lesley on a number of occasions) via the South West Cost Path. The cream teas and cakes of Abbotsbury were an appropriate prelude for the pizza and pies that we consumed later at one of Weymouth’s chic restaurants situated above the harbour master’s office.


Sunday’s weather started overcast but very quickly the sky turned blue and the sun shone brightly. The wind of the previous two days had gone and we enjoyed a very pleasant stroll to the Smugglers pub at Osmington Mills. From the path along this part of the coast we could clearly see Portland harbour and the ships anchored in Weymouth Bay as well as the surrounding hills to the north.  Fortified with tea, cake and alcohol, we returned to Weymouth before most people set off for Surrey, hopefully ahead of the mad rush back to the smoke that characterises Sunday evening on the roads.


In summary, there were three excellent walks that gave a good view of the coastal scenery of west Dorset, lots of good food and great company. Many thanks must go to Lesley for leading the walks, all her hard work in making this trip the success it was and for arranging weather that was perfect – apart from the Saturday showers! 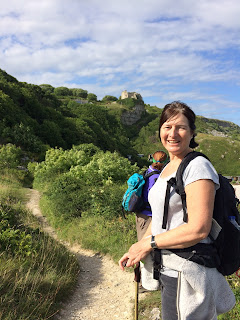 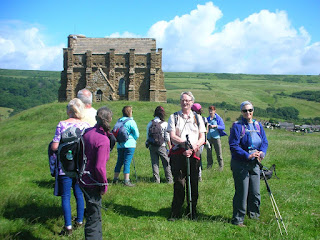 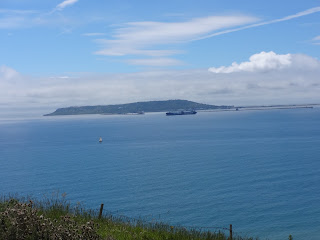 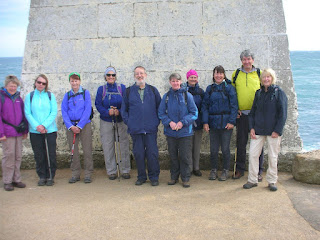 Gathered By The Monument On Portland Head 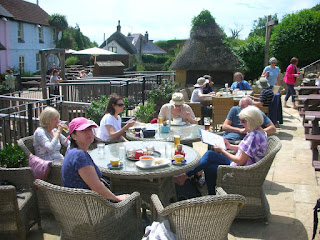 Additional Photos
Posted by S.W. Surrey Walker at 13:40 No comments: