This walk was an old favourite, starting at Newlands Corner. The weather was fine although overcast but fortunately didn't spoil the fine views.

The route took us up to St Martha's Church, a steady climb well worth the effort, and nice spot to pause for a moment before heading off downhill towards the Chantries Woods.

Points of interest on route were the ruins of the Gunpowder Factory (currently being cleared of undergrowth) at Chilworth,  and a small herd of curly coated Hungarian Mangalitsa pigs.


Leaving Waterloo Pond the terrain continued steeply uphill before reaching White Lane and the last climb returning to our starting point at Newlands Corner. Three of us stayed on afterwards for Lunch at the café.

Our walk on Sunday started at the Frensham Hotel, a lovely setting overlooking Frensham Great Pond. We were a small group of four including myself, I guess some of you may have been put off by potential weather conditions.

We were lucky though, a  little damp at times but we all enjoyed a very pleasant walk on an interesting and varied new route. 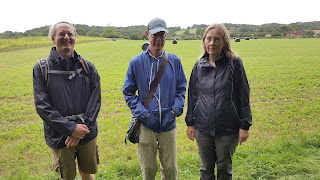 13 of us set off on the walk. We were lucky with dry weather and it got warmer as the walk progressed and so we gradually removed layers of clothing.

Parking proved unexpectedly difficult as the Moat pond car park was unexpectedly full as several groups had chosen the same day to walk. There was a group of birders, a young walking group and us and many people out taking advantage of the fine weather.

We set off round the Moat pond and confidently followed a board walk across the marsh until we came out at a beautiful artwork of a dragonfly which was not on our intended walk. Going across this way we did however see numerous lizards basking on the board walk carefully resting at the edges so we would not tread upon them. They were remarkably untroubled by our approaching although a few did take shelter as more and more of us passed by and stooped to examine them. Consulting Johns Sat Nav we worked out the board walk we should have been on and took the path back to the intended walk which brought us to the birders by Pudmore Pond. A little further along brought us to Thor's Stone, a mighty rock jutting out of the marsh all of two feet above the ground.

The path took us across the Heath through Ockley Common across a stream and to Fork Pond where we stopped to admire the lake and sat on three conveniently placed huge logs and had a drink.

Continuing the path we walked along the pond and through a wood coming out to where Hammer Pond should have been visible. In this case the problem was due to the fact that the pond had been drained rather than us going wrong. From here we walked up a valley which gave us a view at the top to the edge of Thursley Common one way and to Box Hill the other. At one time this had been part of the London to Portsmouth Road.

A little further on we came to the Old Portsmouth Road and took a path across a field where we had a fine view of a deer grazing. We walked on around Thursley Church and resisted the call of the Three Horseshoes pub which was 150 metres off our path. Paths then took us back across heathland and a very sandy path to the Moat.

We arrived back in three groups as two Hobbys proved of overwhelming interest to the bird watchers amongst us but we all did get back safely.

A very varied walk. If you have the walk book The walks near Godalming it is number 15. Do walk it. It is beautiful and the best of luck with finding your way through the board walks.

Our thanks to Keith for an interesting and varied walk, and also for the detailed walk report!!

14 of us turned up for the  6.5 mile walk from Gomshall, mostly the usual suspects but it was good to see Colin and Mary after such a long time.  May is such a gorgeous month that even though the sun didn’t come out until after we’d finished, it was still very pleasant.  The main hope was for bluebells but I was worried that as they’d been so early this year and as they’re finishing so early because of the lack of rain, that we may have missed them.  But there were loads of bluebells still looking gorgeous, and as well as all the fresh green lushness, there was also plenty of stitchwort, cow parsley, cuckoo flower (no cuckoos though)  and (according to Jenny who must be right) red campion.

We walked up into the hills above Gomshall and had lovely wide views before entering woods and finally meandering down to the Volunteer pub in Sutton Abinger (currently closed for refurbishment.)  More woods and more open spaces with lovely views before getting back to Gomshall just before 1.00.

7 of us went to Tillings for coffee and cakes and 4 into the Mill for something more substantial.

Thanks to Amanda for leading this excellent walk.
Posted by S.W. Surrey Walker at 12:14 No comments:

The day dawned clear and cold. Despite a forecast for cloud and a chance of rain, we were very pleasantly relieved. 13 of us assembled in the pub car park plus our lively Staffie Skye, the discussion was not about what to wear but whether sunglasses would be necessary! Cutting through the adjacent church grounds, we then turned south towards Headley Heath. The going was actually very benign as the muddy bits had all frozen over.

Passing the Headley CC house en route, Helen stopped the group to announce that the cricket club did NOT have any famous members play for it! Heading further south we encountered two small ponds dedicated to encouraging amphibian life. The first pond is called Hopeful (Photo opportunity!) and the second pond is called, as expected, Brimmer?!!!

We moved on. Joe led the group to a lovely cottage in the woods, a slight wrong turn but quickly corrected! A minor two minute detour and we were all back on the right track. The path descended into a gully and as the group walked up out of it they saw a very old dam which may have been connected to the Canadian military base there in WW2.

We then followed a long straight path which led past Bellasis House (SOE WW2) and Ashurst house (now an outdoor activity centre).

Stopping for lunch, we enjoyed watching a number of robins watching us watching them! The descent to the bottom of Headley Heath from there was steep but at least dry! What goes down must go up! We joined the pathway as it led to the Steps! Many steps! A good workout for all! After a short rest, and taking in the lovely view  over to Box Hill, we meandered across the heath enjoying the bright clear sunshine. Eventually we left the official Heath boundary and crossing a couple of roads and paths we headed back gently uphill to the Cock Inn where 10 of us stayed for coffee, soup and some good Surrey ale.

Not a bad morning in the end! Many thanks to those who took the time and effort to join us.

Ten people came for the walk on Sunday keen for some exercise before loosening our belts at Christmas. It was mild for the time of year but damp although we had no rain. Starting from Sheerwater Road we walked up the Basingstoke Canal going under the M25 and then crossing the Wey Navigation. We then walked down the Wey until we reached Murray's Cart Bridge. As this is now closed we saw neither carts nor anyone else crossing here. At this point we took a track left which went over the M25. On the far side we encountered a field with pigmy pigs, llamas and other farm animals all happily living together. No sign of old MacDonald.
We walked on to Byfleet Church walking through the graveyard and stopped for a break at the end. We came out on to the road which became a path which led us under the M25 for the third time. The track us to Wisley where we swung by the church and into Wisley Golf Course. We succeeded in finding our way through the course, not the easiest of things to do as I have found in earlier attempts, and back to the Wey Navigation at Pyrford Lock.
Resisting calling in at the Anchor we were soon told by a barge coming in the opposite direction that we were going the wrong way to the pub. Nevertheless we pressed on crossing the Wey at Dodd's Bridge and following paths through fields until we came out at Holybank Road and a walk through the private estate. We soon came to the A245 and had a discussion about the best route across. We decided eventually to use the crossing which was a great idea until we realised it was not working so we stepped out and fortunately the traffic stopped.  Back to the cars we went our separate ways, all I believe intact.
Posted by S.W. Surrey Walker at 09:10 No comments:

11 of us gathered in the Green Dene car park under leaden grey skies although as the first part of the walk was though the trees, the sky wasn’t that visible. It wasn’t long before the clouds dissipated and the sun came out to give a very pleasant day.

The walk took us up hills and down dales, through woods and across meadows with some splendid views across the Thames Valley, with London just visible in the far distance. Sadly, there was ample evidence of ash dieback, a disease that is wreaking havoc with one of Britain’s native trees. The attached photos show those of you that didn’t do the walk what you missed. Many thanks go to Jenny for leading yet another great walk.